We love all our children equally, of course; but most would admit that there is a special bond with the first-born. I treasure every one of Maeve’s novels, but Light a Penny Candle will always have a profound hold on my heart. It was written in 1981 and first published in 1982; now, more than thirty years later, the writing is as vivid as ever and as firmly imprinted on my mind. To this day, my party piece is to recite the opening of Chapter One: ‘Violet finished the library book and closed it with a snap. Yet again, a self-doubting, fluttery, bird-brain heroine had been swept away by a masterful man…’ 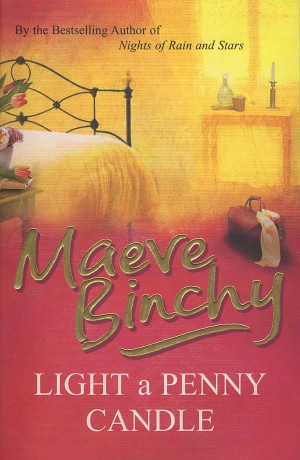 It all started with a scene Maeve had observed as she travelled into work from her home in west London to the Irish Times office in Fleet Street. It was the sight of a woman emerging from the Royal Courts of Justice on the Strand that caught Maeve’s attention. The pain and distress etched on her face made Maeve wonder what had brought the stranger to that moment. The novel begins with a Prologue set on the steps of a coroner’s court, while ‘…the world was going on normally. Buses passed by, no one stopped to see them…’

In 1981, Maeve was London Correspondent of the Irish Times; she was reporting on events as diverse as the engagement and wedding of Charles and Diana, and the Brixton riots. She worked immensely hard: up at five every day to put in three hours novel-writing before she left for work. Journalists are used to writing to deadlines, so we agreed she would deliver a chapter of the novel every week; and so I received the new material every Friday thereafter. It would be delivered by taxi: no email, no digital media, nor even any fax machines then. It would be typed on non-carbon copy paper – for younger readers, that’s a type of coated paper which transfers an impression of the typing on the front to a copy underneath. Her typewriter was old and battered and made holes in the paper when certain keys were struck: a sheet of paper held up to the light looked like filigree. Maeve’s typing was legendarily haphazard and sometimes whole words appeared as anagrams; a degree of line-editing was necessary before the material was ready to be sent off for re-typing. I have it to this day, the first draft of the first novel…

And how does it stand up today?

Ten-year-old Elizabeth White, shy and fearful, is sent from war-torn London to stay with the O’Connor family in Ireland and there she begins a life-long friendship with Aisling. There’s a glorious cast of characters, and a rich and absorbing narrative. If you haven’t read it there’s a treat in store. And if you have read it already, I promise you, it’s just as good the second time around. And the third. And the fourth…