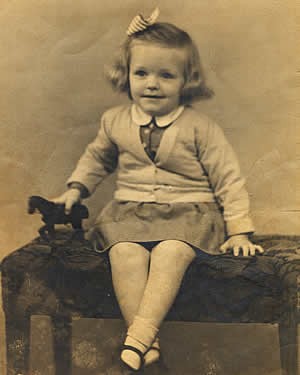 My memory of my home was that it was very happy, and that there was more fun and life there than there was anywhere else. My mother could do all kinds of things, like take a bone out of your throat if it got stuck and you were choking, or clean out a turkey on Christmas Eve when it arrived far from oven-ready. She could take out splinters and cure headaches and get the grocer to deliver her a packet of Gold Flake by giving a list of other items as well and asking if it could be brought up to the house soon because she was in a hurry for the cornflour. Our house was ten miles from Dublin City where we all went to University and then to work. Ten miles is near enough to live at home, and just a little too near to get a flat unless there was some bad feeling. And there was no bad feeling.

I was the big bossy older sister, full of enthusiasms, mad fantasies, desperate urges to be famous and anxious to be a saint. A settled sort of saint, not one who might have to suffer or die for her faith. I was terrified that I might see a Vision like St Bernadette or the Children at Fatima and be a martyr instead. My school friends accused me of making this up but I never looked up into trees in case I saw Our Lady beckoning to me.

I was lucky enough to be fairly quick at understanding what was taught, but unlucky enough not to be really interested in it so I always got my exams but never had the scholar’s love of learning for its own sake. And even though I was fat and hopeless at games, which are very unacceptable things for a schoolgirl, I was happy and confident. That was quite simply because I had a mother and a father at home who thought I was wonderful. They thought all their geese were swans. It was a gift greater than beauty or riches, the feeling that you were as fine as anyone else. 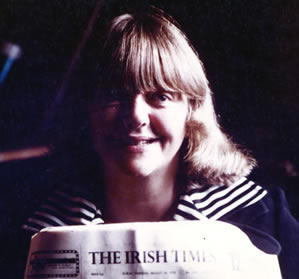 My mother hoped I would meet a nice doctor or barrister or accountant who would marry me and take me to live in what is now called Fashionable Dublin Four. But she felt that this was a vain hope. I was a bit loud to make a nice professional wife, and anyway, I was too keen on spending my holidays in far flung places to meet any of these people. The future leaders of society did not holiday on the decks of cheap boats, or work in kibbutzim in Israel or mind children as camp counsellors in the United States. She abandoned this hope on my behalf and got great value out of my escapades in foreign parts. I wrote marvellous long rambling letters home from these trips, editing out the bits they didn’t need to know, bits about falling in love with highly unsuitable foreigners. In fact my parents were so impressed with these eager letters from abroad they got them typed and sent them to a newspaper and that’s how I became a writer.

I met Gordon Snell, a writer, a man I loved and he loved me and we got married and it was great and is still great. He believed I could do anything, just as my parents had believed all those years ago and I started to write fiction and that took off fine. And he loved Ireland, and the fax was invented so we writers could live anywhere we liked, instead of living in London near publishers.

So now we have this house in Dalkey a few hundred yards from the house where I lived with my parents. My sisters and brother all live nearby, we are the closest of friends. We talk of old times without any heavy emotion, we recall funny things, holidays down by the Atlantic where we used to trail our bathing suits in the water and then hang them on the clothes line to dry to let our parents think we had been for a healthy refreshing swim. Why leave a good place?